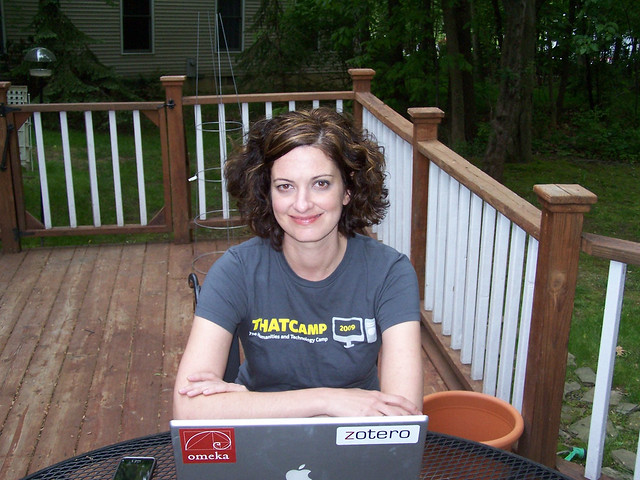 When I think of the THATCamp era, 2008-2014, I think of the Wordsworth lines from The Prelude: “Bliss was it in that dawn to be alive / But to be young was very heaven” (see at Hathitrust). Wordsworth was writing about the French Revolution, which started out so promisingly: his initial passionate enthusiasm for it, and indeed for transformative social reform generally, an enthusiasm that later turned to disillusionment and disaffection as the Revolution turned into a bloodbath.

THATCamp was just part of a kind of general tech optimism that had its peak in the mid- to late 2000s, back when “Web 2.0” signaled forward thinking. I was certainly part of that tech optimism: what was appealing about it was not so much anything about actual technology but about the social reforms that seemed to come along with it – the increased egalitarianism, especially. Disintermediation. The Wiki Way. As a recent Wired magazine article about Wikipedia puts it, “Not too long ago, techno-utopianism was the ambient vibe of the elite ideas industry; now it has become the ethos that dare not speak its name. Hardly anyone can talk abstractly about freedom and connection and collaboration, the blithe watchwords of the mid-2000s, without making a mental list of the internet’s more concrete negative externalities.” Or as Trevor Owens just put it in his piece “Growing Up with THATCamp,” “It also feels like we’ve lost a lot of the optimism that surrounded those events, I think in part as it feels like the community became more aware and engaged with how problematic the values at play in digital technology ideologies are” — that very much nails part of my own attitude these days.

Yet THATCamp never did have a major fall from grace, and I still believe strongly that THATCamp was (and is!) a lot better than traditional conferences at things like de-emphasizing hierarchies, and that a lot of people learned a lot, a lot! And had fun. Like Wikipedia, I think THATCamp has managed to retain the values and methods of its inception, although perhaps that’s because the project has been quiet for the last six years, though by no means moribund.

So, how to sum up? Well, I’ll do my best. First, I’ll quickly repeat a few statistics that I’ve shared elsewhere:

Going beyond the numbers, I’ll say that I think the chief contribution of THATCamp was (as I’ve said above) that it really helped a lot of people learn a lot. Or rather, learn a little, through workshops, discussions, and perhaps above all the Dork Shorts, and then feel emboldened and motivated to learn more. This, I might add, was perhaps not its original purpose: I think THATCamp did begin as a place for “experts” to get together and build things, but it became much more friendly to the “yak” side of “More hack, less yak,” and much more friendly to what I always termed “the digicurious,” and that was partly by design.

I’m also very glad we encouraged so many workshops at THATCamps, because I had a great time teaching those (especially Omeka workshops) and a great time attending them. I especially liked when people put together workshops on the fly, when it became clear that someone could teach something that others were keen to learn — that happened relatively often, but the two I remember are when Jason Puckett offered to teach Zotero down at one of the THATCamp Southeasts (I think) and when someone offered to do a demo of the new features of HTML 5 in some hotel lobby somewhere. It was all very “Hey, my dad’s got a barn / I have some knowledge — let’s put on a show / have an impromptu lesson!” I also loved going to Tom Scheinfeldt’s project management workshops, which I did at least a couple of times. I also remember teaching a workshop on regular expressions and having someone ask me “So, what would you use this for?” That was a tough one, because if you’re working with code or with text as data, good heavens, what DON’T you use regex for? But not everyone does! (I never taught regex again, but Ben Brumfield did, several times.) I remember learning R (well, “learning” R) from Lincoln Mullen at THATCamp AAR (American Academy of Religion); I remember learning about using Layar for augmented reality at THATCamp Museum Computer Network from Markus Wust, and I remember NOT getting to learn about Google Fusion Tables from Mano Marks at THATCamp Prime 2011 because I was busy running around organizing everything and couldn’t go to the workshop. I remember having a working session with Nancy Ross at THATCamp College Art Association where we drafted an intro to Art History textbook right there in the room; I remember Michael Mandiberg, he who would later print out all of Wikipedia as an art project, helping run a Wikipedia editathon; I remember proposing a weird meditative session at THATCamp Virginia where Brandon Walsh and others where we sat around and listened to Listen to Wikipedia while free-writing.

I remember the people. Thanks to all of you for a great four years and beyond.