It was my Dad, George H. Brett II, who told me about THATCamp. He was my introduction to many DH things – html, the world wide web, twitter, and RRCHNM. I was working in public history, and after he attended a THATCamp in Fairfax he encouraged me to attend the next year.

I remember that as we were approaching THATCamp (2010?), he paused and asked, with some trepidation, if it was okay if people knew we were related; I think he knew I was a little nervous, and he was willing to back off, to give me space to be my own person. I think I laughed, and I definitely said I didn’t mind people knowing he was my Dad. 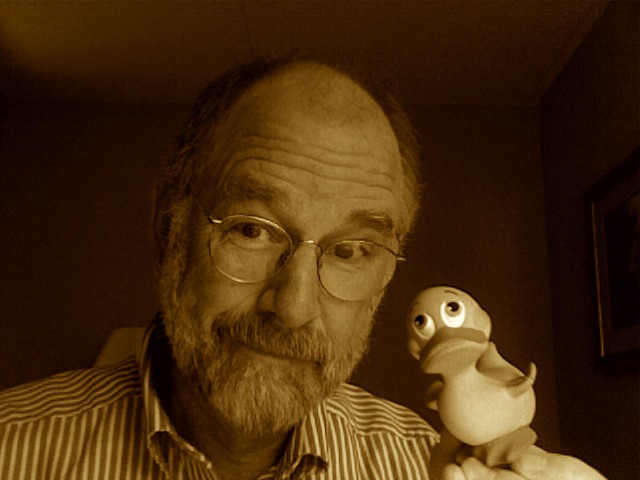 My experience at my first THATCamp was that it created a space where emerging digital humanists – myself included – felt just as welcome and heard as “old farts” (his term) like my Dad. Everyone was welcome, there was little to no hierarchy, and in its place a space for collaboration and discovery. I was, and am, happy to be “George’s daughter” – and THATCamp was a place where I, very briefly, also got to be his colleague, a fellow-traveler in digital humanities computing, seeing him in a new light.

There’s a clear line from my first THATCamp to where I am now: Dad introduced me to THATCamp; THATCamp introduced me to RRCHNM and George Mason University; now I’m RRCHNM staff and a doctoral candidate at GMU. In addition, the people I met through THATCamp introduced me to an idea of digital humanities that is friendly, engaging, and collaborative. I was nervous that day because I wasn’t sure I “belonged;” what I found was a group of people who welcomed me and my experiences. Whether or not I found my feet as a digital humanist at THATCamp, it’s definitely where I started to be comfortable with describing myself as one.

Ten years later, Dad’s attendance at THATCamp is a gift. There are people I work with, both at RRCHNM and the broader DH community, who met my Dad at a THATCamp, who experienced his sometimes overwhelming enthusiasm, his deep knowledge of humanities computing, his generous spirit. It’s hard for me to articulate why this is so important – it’s more than just hearing someone say “he was very kind.” For me, THATCamp will always be tied to my memories of my father, and the possibilities he shared with me.

[As a side note, if you have memories of my Dad at THATCamp – silly, serious, or otherwise – I’d love to hear them. Find me on twitter: magpie.]